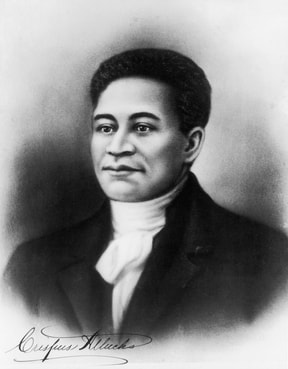 Crispus Attucks was the FIRST man to GIVE his life for every American's liberty.

On a cold Monday evening on the snow-covered streets of Boston, a fire was lit that would fan the flames of the American Revolution, and a black patriot named Crispus Attucks was there to strike the match.  The time leading up to that fateful spark had been characterized by 17 long months of British military occupation.  On an icy stretch of King's Street, a crowd of citizens who had been pushed to the brink by a "long train of abuses" in the besieged town of Boston were fired upon by government troops at point blank range.  Crispus Attucks who was later referred to as the "leader and voice that day" was first to fall, along with Samuel Maverick, Patrick Carr, Samuel Gray and James Caldwell. By the time the smoke cleared five men lay dead or dying and six more were wounded. That scene on March 5, 1770 would come to be known as the Boston Massacre.  So when Americans hear "Boston Massacre," how many think of a black patriot? How many think of Crispus Attucks?

Born into slavery around 1723 to Prince Younger (African) and Nancy Attucks (Native American), it is said that Crispus had a talent for buying and selling goods. He would eventually escape slavery around 1750 and work for the next 2 decades as a whaler and rope-maker sailing in and out of Boston, possibly living under the alias Michael Johnson.
POWDER KEG 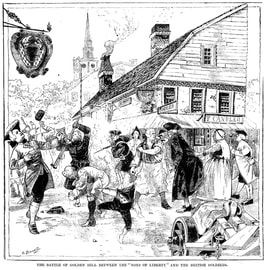 Boston had become a powder keg in the years and days leading up to the Boston Massacre.  The colonists had numerous grievances against a government growing more and more oppressive by the day. The government was trampling the colonists' property rights and their rights to due process through illegal searches and seizures, burdening them with taxes without consent or representation.  Colonists were also incensed at the government interference with their commerce and their businesses. They endured restrictive mandates and constant harassment by tax collectors and customs agents.  The British government passed a string of laws to clamp down on the "rebellious spirit" of the colonies and sent regiments of troops into the city of Boston to ensure that the inhabitants complied.
​DEATH OF CHRISTOPHER SEIDER
The constant presence of 4,000 armed troops parading through the streets of a city of 15,000 inspired plenty of resentment (that's one soldier for every four citizens).  Inevitable violent clashes between colonists and government agents ratcheted up the tension to a volatile level.  Just 8 days prior to the Boston massacre townspeople confronted a merchant for not supporting the boycott of East India Tea.  In the midst of the confrontation a local loyalist, Ebenezer Richardson argued with the crowd of protesters.  He was unceremoniously escorted back to his home with taunts, and he and his home were pelted with rotten garbage for his trouble.   Apparently not satisfied with his wife's response of gathering the rotten food and tossing it back at the crowd, Richardson leveled his musket through the window and fired.  The balls of lead tore through Christopher Seider, a 16 year old bystander who just happened to be passing by.  The rage against the government occupation was now at a fever pitch.

BRAWL AT THE DOCKS
One notable instance between the slaughter of young Seider and the Massacre on King's street occurred when a British soldier approached the rope-making crew, of whom Crispus Attacks was a member. The soldier hoped to gain employment at the docks.  Boston citizens were not happy about losing precious job opportunities to these interlopers from the mother country, particularly when the Quartering Act already burdened the citizens with sacrificing their own resources to house the occupying force.  When the foreman colorfully informed the soldier that he was welcome to clean the outhouse, the soldier decided to defend his honor. He launched himself at two rope-makers and was promptly sent away with a sound thrashing.

Shortly the soldier came back with eight of his comrades to assist him in instructing the rope-makers in lessons of respect.  Unfortunately, the would-be instructors ended up becoming students and were sent away with the same sort of thrashing their comrade had enjoyed earlier.

Attempting to even the odds, a third contingent of 40 soldiers came to teach the rope-makers an additional lesson.  This final session of class likewise backfired and had the soldiers being pummeled and chased all the way back to their barracks. Crispus Attacks would have undoubtedly been part of the rope-maker professors imparting a memorable lesson on "don't start something you can't finish."

This "hands-on" instruction continued up and down the streets of Boston for days leading up to March 5th. Soldiers ended up with broken arms, fractured skulls and busted egos. Then rumors began to spread that a major confrontation was planned the coming Monday. 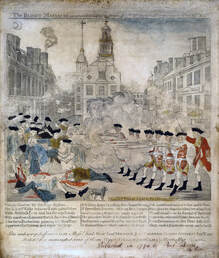 MASSACRE ON KING"S STREET
And so when, on the evening of March 5th, a young man came running down King's Street bleeding from the side of the head, Crispus Attucks and his fellow citizens surely were fed up with soldiers who refused to learn that  tyranny was not welcome in Boston.  The young man with the bloody head was Edward Gerrick, a barber's apprentice who earlier had decided it would be a wise move to mock one of the sentries on King's Street for not paying his bill. The sentry, Captain Goldfinch promptly arranged a violent meeting between the boy's skull and the butt of Goldfinch's musket and then headed back to the barracks amid the sound of alarm bells going off.

Fifteen minutes later, after meeting the bludgeoned youth fleeing from his encounter with the sentry, the group with Crispus Attucks in the lead approached the sentry house.

"That’s him, Gerrick yelled, that’s the soldier who hit me."
"Knock him down. Kill him," someone called out from the crowd.
The remaining sentry was retreating from the sentry box and headed to the barracks as the crowd walked him down.
<Smack! A snow ball clobbers the sentry>
"Stay back! " <Musket up>
"Fire you coward!"

<Soldiers arrayed in front of the crowd>
"They won't fire!"
<Preston blasted in the forehead with a ball of ice.>
"Fire! Consequences be as they may! Fire darn you!"
<One soldier fires>
<Musket is batted down with a club by Attucks>
<A club cuts through the air toward Captain Preston’s skull>
7 to 11 shots... <Crack!> <Boom!> <Crack!>
5 down.... 3 dead instantly....several wounded.

Crispus Attucks, rope-maker and whaler - shot through lung and liver.
Samuel Grey who called  out “they will not fire” shot in the head.
17-year-old Samuel Maverick, an ivory carver's apprentice shot in the stomach.
Patrick Carr leather-worker shot in the  hip. Bleeds out and dies.
James Caldwell 17-year-old bystander shot dead.
​AFTERMATH
10,000 people came out for the funeral of Crispus Attucks.  Word spread throughout the colonies and around the world about the events of March 5th.  Patriots like Samuel Adams and Paul Revere made sure that the event was trumpeted far and wide.  The memory of Crispus Attucks' sacrifice was invoked by the likes of John Hancock, George Washington and centuries later by Martin Luther King Jr. in his own autobiography.

The government loyalists on the other hand, labeled Crispus Attucks and his fellows as troublemakers and criminals.  An anonymous letter to the Boston Gazette denounced Attucks as "a very firebrand of disorder and sedition, the most conspicuous, inflammatory, and uproarious of the misguided populace, and who, if he had not fallen a martyr would richly have deserved hanging as an incendiary." 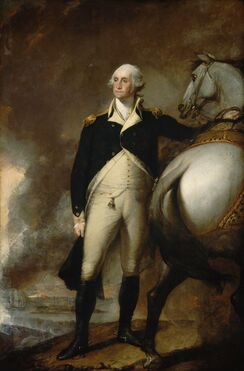 William Cooper Nell responds to the criticisms of Attucks in his seminal work Colored Patriots of the American Revolution by saying, "If the leader, Attucks, deserved the epithets above applied, is it not a legitmate inference, that the citizens who followed on are included...?  If the leader and his patriot band were misguided, the distinguished orators, in the after days, commenmorated the 5th of March, must, indeed, have been misguided, and with them, the masses who were inspired by their eloquence..."

In fact March 5th was the original 4th of July.  The day was celebrated until the commemoration of the Declaration of Independence replaced it.  "The anniversary of the 5th of March was observed with great solemnity; eloquent orators were sucessfully employed to preserve the remembrance of it fresh in the mind. On these occasions, the blessings of liberty the horrors of slavery, and the danger of a standing army, were presented to the public view.  These annual orations administered fuel to the fire of liberty, and kept it burning with an irresistible flame."

​Gen. George Washington at the Fortification of Dorchester Heights in 1776 declared to his troops "Remember, it is the 5th of March, and avenge the death of your brethren!"
​REMEBERANCE
An excerpt from the poem by John Boyle Oreily reads
And honor to Crispus Attucks, who was leader and voice that day;
The first to defy, and the first to die, with Maverick. Carr, and Gray.
Call it riot or revolution, his hand first clenched at the crown;
His feet were the first in perilous place to pull the king’s flag down;
His breast was the first one rent apart that liberty’s stream might flow;
For our freedom now and forever, his head was the first bid low.

Call it riot or revolution, or mob or crowd, as you may,
Such deaths have been seed of nations, such lives shall be honored for aye.
BE SURE TO READ THE FULL POEM HERE... 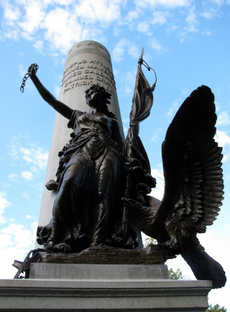 ​According to the Crispus Attucks Museum:
In 1887 the Massachusetts General Court decided to erect a memorial to those who died on the night of the Boston Massacre.  Many city officials were opposed to the project arguing about its appropriateness, historical distortion and political opportunism. The monument was supported by prominent citizens including black and white abolitionists and was erected in 1888.

The Boston Massacre / Crispus Attucks monument honors the victims of the Boston Massacre It stands at 25 feet high and 10 feet wide. On top stands a figure representing the Spirit of the Revolution inspired by Eugene Delacroix’s painting of Liberty Leading the People, a symbol of the French Revolution. She holds a broken chain in her right hand to symbolize freedom from the oppressors and in her left hand she holds the American flag. With her right foot she crushes the crown of the British monarchy and next to her other foot an eagle prepares to fly.  It is located on the Boston Common, between Tremont Street and Avery Street in Boston, Massachusetts.