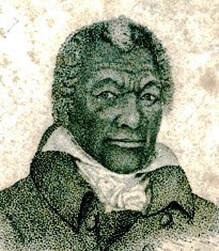 A key figure in America’s final victory over the British Empire, one could argue that ultimate victory, and therefore the birth of a new nation, rested to a great extent on the shoulders of one black patriot-James Armistead Lafayette. He deserves his place in history where he served - next to revolutionary war heroes General Washington and the Marquis de Lafayette 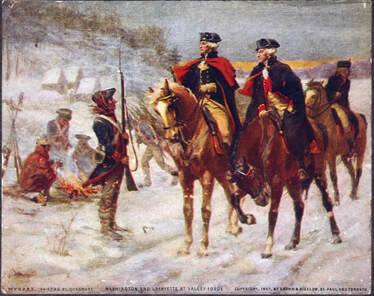 ​James was born around 1748 in New Kent County.  During the War for American Independence his master, William Armistead was appointed to be one of the managers of Virginia's military supplies in Williamsburg. From there James Armistead made his way to Richmond and joined the service of the Marquis de Lafayette as a patriot spy.
​
Under the command of the Marquis de Lafayette, James successfully gained access to Lord Cornwallis' camp and passed himself off as a servant and waiter for the British commander.

​It was said in his petition to the Virginia General Assembly that James, "often at the peril of his life found means to frequent the British Camp, by which means he kept open a channel of the useful communications." 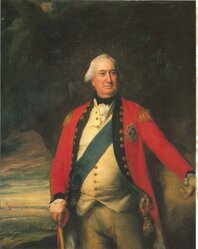 ​James Armistead’s intel revealed to Lafayette, Cornwallis' move from Portsmouth to Yorktown.  James gave detailed accounts of the British army's fortification of the town, and the vulnerable position of the British forces.

​​While in the British camp, James Armistead even fooled Cornwallis into allowing him to act as a spy for the British against the patriots. He then worked as a double agent feeding the British commander false intelligence about American troop strength and movement.  Interestingly, Benedict Arnold, whom Washington regarded as the best military mind on either side of the war, advised Cornwallis to relocate. Had Cornwallis heeded Arnold’s advice, the far superior British Army may have avoided defeat. It was the disinformation of James Armistead that kept the forces of Cornwallis right where the patriots wanted them.
​James Armistead’s espionage efforts gave the American and French forces of Washington and Rochambeau enough time to reach the Chesapeake to cut off Cornwallis’ retreat, thus directly contributing to American victory and Cornwallis' surrender on October 19, 1781.  This was the last major land battle of the war and meant victory for what would become the new American Republic.  The groundwork for this final decisive battle hinged on the efforts of a single black patriot – James Armistead Lafayette.
​After the war James Armistead returned to Virginia.  Because he was a spy and not an enlisted soldier, Virginia legislature passed a law in 1782 to provide for the freedom of slaves who had served in the war. It was argued that this didn’t apply to James Armistead because he didn’t serve as “a soldier” only as a spy.  In November 1784 the Marquis de Lafayette personally sent a plea for his "honest friend" in a handwritten testimonial for the Virginia General Assembly: 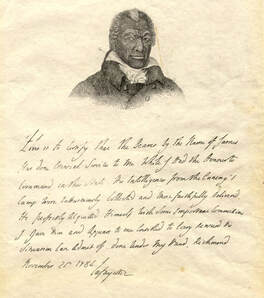 "This is to certify that the Bearer has done essential services to me while I had the honour to command in this State. His Intelligence from the ennemy's [sic] camp were industriously collected and most faithfully delivered. He perfectly acquitted himself with some important commissions I gave him and appears to me entitled to every reward his situation can admit of."

​In November 1786, James's former master William Armistead was now a member of the Virginia legislature and fought for James Armistead to be granted his freedom.  He used Lafayette’s commendation to support his petition to the Virginia Assembly "that he may be granted that Freedom, which he flatters himself he has in some degree contributed to establish." The legislature approved the petition and the slave known only as James became James Armistead LaFayette, a free Virginian, on January 9, 1787. In 1818 he was granted an annual military pension of $40 for his service in the war.​

​In 1824 the Marquis de Lafayette was invited to America by President Monroe. The Marquis made a tour of all 24 states including Virginia.

The Richmond Enquirer reported that during the event at Yorktown, James Armistead "was recognized by [the Marquis] in the crowd, called to him by name, and taken into his embrace."

While the Virginia slave-owners looked on, the famous French general and the black patriot spy that helped give America its decisive victory stood and embraced one another.
​
This great American hero, James Armistead Lafayette died six years later - August 9th, 1830.